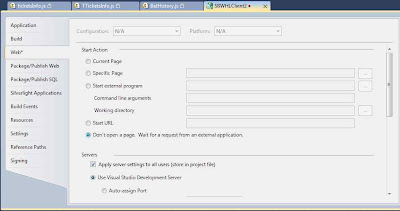 Configuring Asp.Net To Open New Browser Window When Start Debugging. Not too long ago I encountered a small problem that occurred to one of the developers in my team when he got a new computer. Previous to the new PC, whenever he clicked on "Start Debugging" (also known as F5) the solution compiled and opened a new browser window with the default page. After the new PC arrived the configurations in his Visual Studio 2010 were different. Meaning - Whenever he clicked F5, the project was compiling, but no browser windows appeared. With a short phone call I explained the steps he needs to do, but in order for it to be clear for all of us, I decided to upload it as a brief post. Right click on the project's name. Click on "Properties". A configuration manager window will open. Click on the third tab called "Web". On that tab you will have several sections, the first the is what we're interested in. on "Start Action" section (
8 comments
Read more 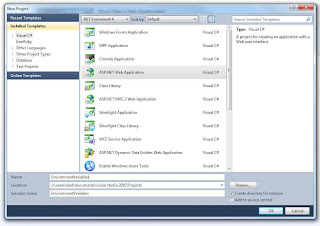 How to create configuration or Environment variables in Visual Studio 2010. Environment variables are a great thing for when you publish your website to multiple places. It doesn't matter if you publish it to testing / staging / production environment or if you're publishing your site to several servers which require different methods to be called / different values assigned to parameters. Lets create a web application project (further explanations will be granted later) Open Visual Studio 2010 Create New Project -> ASP.NET Web Application As you can see, you automatically have two configuration options: Debug Release Right click on the project in the Solution Explorer . Click on Properties . Click on Build tab. Under that tab you have many configuration options (which will be discussed in another post). The field we're interested in is " Conditional compilation symbols ". While on Debug mode, we will write a variable name in t
13 comments
Read more
More posts